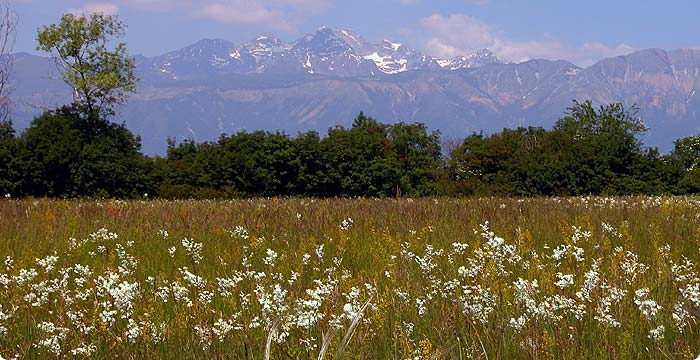 Since the 70s the problems related to the progressive loss of biodiversity have begun to receive increasing attention from the international community. In 1992, with the signature of the Rio Convention on Biodiversity, all the Members States of the European Community recognized, as priorities to be pursued on the spot, the conservation of Biological Diversity, to "Anticipate, prevent, and attack at source the causes of a significant reduction or loss of biodiversity because of its intrinsic meaning and its ecological value, but also has indirect genetic social, economic, scientific, educational, cultural, recreational, and aesthetic values. At a European level, the policies in the field of biodiversity conservation have their foundations in two EU Directives: "Birds" (Directive 79/409/CE) and "Habitat" (Dir. 92/43/EEC). In particular, with Art. 3 of "Habitat" the European Union stipulates the establishment of a European ecological network called Natura 2000, which consists of an integrated set of sites (SCI and SPA) and areas of connection managed so as to ensure the maintenance of rare or menaced species and habitat types at a European level.

The "Habitats" Directive is innovative in several respects.

The "nodes" of the Natura 2000 network, that is, the SCI and SPAs, are identified on the basis of a  significant presence of particular habitats and species of flora and fauna particularly vulnerable and of great interest as far as conservation is concerned. The establishment of a network ensures the continuity of movements, especially of migratory species or of the most mobile species in the territory, and therefore of genetic flows within the plant and animal populations, ensuring their vitality in the long run.

SITES OF EUROPEAN COMMUNITY IMPORTANCE AND SPECIAL PROTECTION AREAS
The SIC are "Sites of Community Importance" while SPAs are "Special Protection Areas". What is the difference? SPAs are areas established specifically for the protection of birds and arising from the implementation of the "Birds" Directive. The SIC are dedicated to the protection of habitats and species of flora and fauna listed in Annexes I and II to the "Habitats" Directive. In both cases, it is sites that play a significant role for the subsistence of populations or types of habitats for which they have been designated. SCI and SPA often coincide or overlap with each other or with other protected areas such as parks and Nature reserves.

RULES AND NATIONAL AND REGIONAL PROCEDURES FOR THE ADOPTION OF THE DIRECTIVES
At the national level, the Birds and Habitats Directives are been implemented respectively by Law 157/92 and Presidential Decree 357/97 and subsequent changes introduced and integration.
At the regional level, the matter is governed by regional law 17/2006, 14/2007 and 7/2008.

Decree of the President of the Republic of September 8, 1997, nr. 357
Regulation implementing Directive 92/43/EEC

Ministry of the Environment Decree of  April 3, 2000
List of Special Protection Areas designated in accordance with Directive 79/409/EEC and proposed sites of Community importance for the Directive 92/43/EEC

Ministry of the Environment Decree of September 3, 2002
Guidelines for the management of Natura 2000 sites

May 4, 2007 Regional Council Resolution no.1018
Establishment of a Special Protection Area of "Magredi Pordenone"

The Habitat Directive (Dir. 1992/43/CEE) adopted on 1992, together with the Birds Directive represents one of the most important cornerstones of the Europen Community politics around the biodiversity safeguard. It aims to ensure the enduring vitality of a set of over 200 habitats and 1,000 threatened species at the European scale maintaining or restoring what is called their "satisfactory conservation status". Habitats and species deemed to be of "Community interest" appearing in special lists (Annexes).

Annexes I and II show respectively habitats and species of Community interest whose conservation requires the designation of Special Areas of Conservation. In these two Annexes the asterisk shown next habitats or species indicates that these are the most important from a conservation point of view since they are considered to be of priority interest to the EU.
Annex III sets the selection criteria for the identification of Community importance sites then designated as Special Areas of Conservation.
Annex IV lists the species subject to a particular protection system that forbids the collection or the killing, capture and detention.
Annex V mentions the species for which hunting or gathering is possible but shall be based on rules defined by individual states which has to exclude the use of non-selective means of capture or large scale.

To pursue the ecological coherence of Natura 2000, the EU countries also committed themselves to promote the management of different landscape elements, such as rivers and shores, traditional systems for marking field boundaries, ponds or small woods, deemed essential in their connection role for migration, distribution and genetic exchange of wild populations.
The Directive specifies that the habitats and species of Community interest should be monitored to get a picture of their conservation status and trends making compulsory - every six years - the preparation of "balances" on the health of habitats and species of Community interest and on the level of effectiveness of the Directive itself, highlighting areas requiring intervention or correction.

In order to allow the Natura 2000 network sites play an effective role for the biodiversity conservation, it is important that their management is adequate to the ecological requirements of the habitats and species for which the sites themselves have been designated. For this reason, the Habitats Directive envisages the identification of "Conservation measures", that is "that complex of actions necessary to maintain or restore the natural habitats and the populations of fauna and flora species at a favorable conservation status".
In Italy the first set of conservation measures has been defined in the Ministerial Decree n.17 of 11 October 2007, which laid down the minimum retention criteria that apply to all Natura 2000 sites within the national territory. Regions have the responsibility for putting into practice what is indicated in the Decree, possibly adding more restrictive rules and preparing if necessary the management plans for individual areas.

The Friuli Venezia Giulia Region anticipated the Ministerial Decree promulgating in June 2007 the Regional Law n.14 which indicates a number of general conservation measures valid for all the SPAs of the Region. A further step towards the implementation of the said Decree has been accomplished through the adoption of Regional Law n.7/2008 (which contains a comprehensive set of rules fulfilling the Habitats and Birds Directives, including the Safeguards General for SCIs).

In addition to the conservation measures laid down at national and regional level, the Habitats Directive and the national and regional legislation require the adoption of the specific conservation measures mentioned above and, if necessary, of management plans valid for individual Natura 2000 sites. Plans are "drawn up taking into account local customs and traditions" as well as in compliance with the guidelines and criteria established at national and regional level.
The aim of measures and management plans is to consider local specificities and needs of particular species and habitats in each protected site. The Regional Law n.7/2008 explains the path for developing and adopting the specific conservation measures and the management plans. It provides a broad involvement of local authorities, technical bodies and stakeholders including in particular the agricultural categories.
The management plans are essential where the sectorial and territorial plans don't guarantee the ecological requirements of the protected species and habitats. Therefore they aim to integrate as consistently as possible the conservation objectives and the human activities within Natura 2000 sites.
The adoption/approval of the plans for four Natura 2000 sites has been scheduled within the Life Magredi Grasslands Project.