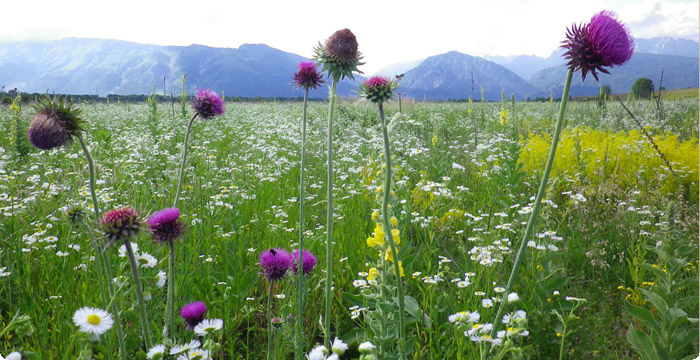 Phases of restoration of a dry grassland starting from abandoned uncultivated land. Photo by Fabio Bidese

The restoration to dry grassland of abandoned agricultural areas is required to restore and expand the protected habitats area, also because the uncultivated areas serve as a source of "inoculation" of ruderal, adventitious and weeds species almost always allochthonous (Senecio inaequidens, Solidago canadensis, Erigeron annuus, Sorghum halepense, etc.). These species have proved capable of penetrating even in the dry grasslands surrounding.

The grasslands reconstruction process is very slow when tampered areas have an altered soil whose baseline condition allowed the presence of dry grasslands. At present there is an excess of nutrients and other crop residues, as well as the conspicuous proliferation of infesting plants that may persist for several tenths of years before giving way to the native components. Many of the grassland species have little prospect of success even when they try to take root in degraded areas and are in fragmented distribution.

The remedial actions, which serves to accelerate the natural recolonization processes, in principle, includes the following steps: